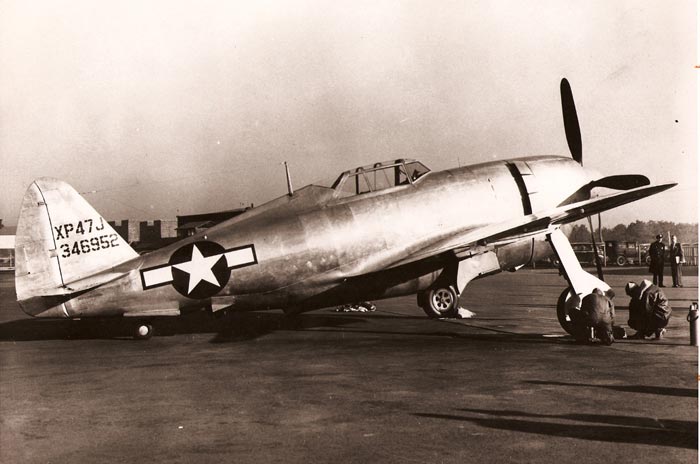 The P-47 was the first American escort fighter to go to the 8th Air Force in Britain. Like every fighter type that arrived there, it would have its teething problems. A ton and a half heavier than the P-51, the Thunderbolt did very well against German fighters at high altitude, but was generally not as maneuverable in medium and low altitude engagements. But its major drawback was fuel economy. The P-51 could escort bombers all the way to Berlin and loiter; the P-47 could not. One thing the P-47 definitely could do better than the P-51 was absorb battle damage and keep flying, this due to the reliability of its air-cooled radial engine and its rugged construction. The P-47 shown here in a government photograph is actually quite unique. Although from this angle it looks like almost any other razor-back Thunderbolt. This aircraft, as denoted on the tail, is the one and only XP-47J. Structurally lighter and with only six guns, it was never put into production.